The Library will be open from 1 to 5 p.m. on Friday, November 11, following the Remembrance Day ceremony and Friends of the Library reception. Learn more.

Content warning: this web page contains information about residential schools in Canada and may be distressing to some readers.

Below are a number of crisis resources for residential school survivors, as well as resources for settlers who want to learn more about the ongoing impacts of the Indian Residential School system. For more information and resources visit our “Reconciliation” page and our “Indigenous Peoples in Canada” page. 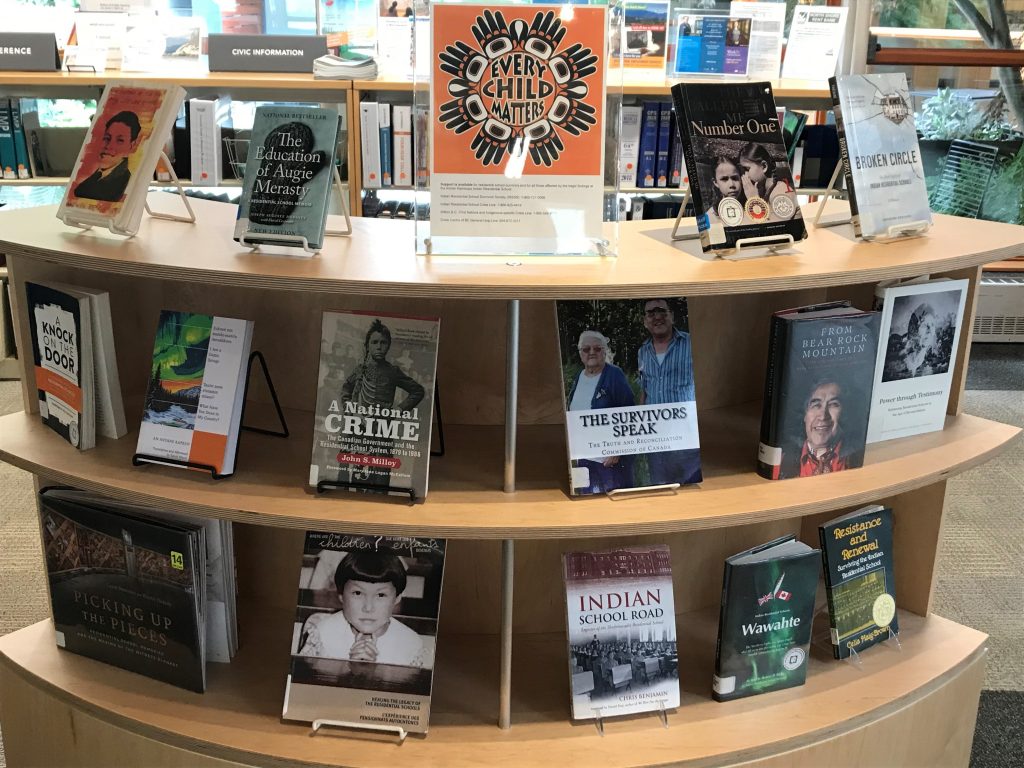 Check these out the next time you’re in the Library or place holds now.

The Truth of Residential Schools

The Truth of Residential Schools

Beyond the Orange Shirt Story by Phyllis Webstad

They Called Me Number One by Bev Sellars

My Decade at Old Sun, My Lifetime of Hell by Arthur Bear Chief

Call Me Indian by Fred Sasakamoose

These recommended websites are free and easily accessible! All you need is an internet connection.

The Indian Residential Schools Crisis Line is available 24-hours a day for anyone experiencing pain or distress as a result of his or her Residential school experience.

The IRSSS counselling team supports emotional, mental, and spiritual development, along with healing and recovery, through culturally-based values and guiding principles for Survivors, families and communities.

The Legacy of Hope Foundation (LHF) is a national, Indigenous-led, charitable organization that has been working to promote healing and Reconciliation in Canada for more than 19 years. The LHF’s goal is to educate and raise awareness about the history and existing intergenerational impacts of the Residential School System and subsequent Sixties Scoop on Indigenous (First Nations, Inuit, and Métis) Survivors, their descendants, and their communities to promote healing and Reconciliation.

Community Health and Wellness at Yúustway Health is offering support for Squamish Nation Members: 604-982-0332 or wellness@squamish.net.

Non-Indigenous people — here’s what you can do, right now

"Non-Indigenous people — here’s what you can do, right now: 7 ways to support Indigenous people grieving in wake of news about 215 children."
by Anna McKenzie, Local Journalism Initiative Reporter and Jacqueline Ronson

Orange Shirt Day is a legacy of the St. Joseph Mission residential school commemoration event held in Williams Lake in the spring of 2013. Orange Shirt Day is also an opportunity for First Nations, local governments, schools and community agencies to come together in the spirit of reconciliation and hope for generations of children to come.

CBC researched the progress of each Call to Action, by reaching out to relevant governments, faith groups, professional and community organisations for comment.  They also cross-referenced federal funding announcements with actual and past financial expenditures.

The Sḵwx̱wú7mesh Úxwumixw (Squamish Nation) announced it has embarked on an Indigenous-led initiative, on behalf of its people and in partnership with its relatives, the xʷməθkʷəy̓əm (Musqueam) and səl̓ilw̓ətaʔɬ (Tsleil-Waututh) Nations, to find answers about the children who attended the former St. Paul’s Indian Residential School but never made it home.

A short video from award-winning Cree and Lakota author and educator Monique Gray Smith: "I share tips on both talking to kids about Residential Schools, but also how to prepare yourself as the adult to have these conversations. The video is for parents, grandparents, educators...anyone really with children in their lives. Also included are a number of author tips of books to read, podcasts, etc to deepen and continue your learning."

The Indian Residential School History and Dialogue Centre (IRSHDC) at UBC addresses the colonial legacy of residential schools and other policies imposed by the Canadian government on Indigenous Peoples, and ensures that this history is acknowledged, examined and understood within the UBC community.

West Vancouver Schools has the privilege and honour of working directly with local Indigenous Elders, Nation Council members, cultural advisors, and educators to provide authentic, meaningful learning opportunities for both students and staff. This page contains videos of legends and ceremonies you can watch as a family, and some for adults to help understand what Indigenous Education and Reconciliation looks like in our community’s classrooms.